Color spectrum and three primary colors.The spectrum color is the color of the colored light in the spectrum, that is, the red light, orange light, yellow light, green light, cyan light, blue light, purple light and other colors that are decomposed by the sun using a prism (with dispersion effect). The so-called spectrum is a continuous spectrum composed of visible light red, orange, yellow, green, cyan, blue, and purple according to their different wavelengths from the longest (760 nanometers) to the shortest (380 nanometers). Spectral color is the purest and most vivid color, and it is the reference color for color measurement. The colors of the reflected light from the scene are not spectral colors. The color of the image displayed by the color film and photo paper used in contemporary photography is far less pure and bright than the spectral color, and both contain traces of ash. 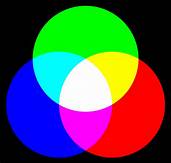 In color photography, the three primary colors of red, green, and blue are called R, G, and B respectively. The two primary colors are added to form a secondary color. For example, red and green are mixed into yellow in equal amounts, and different amounts are mixed into orange (more red and less green). In the spectrum, orange light and yellow light are between red light and green light, cyan light is between green light and blue light, and violet light is between blue light and red light, so orange, yellow, cyan, and purple are called “intermediate colors”. 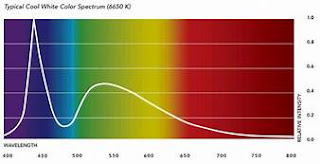